Finally we got some BUZZ around Adobe Analytics. Noticed something strange in the first sentence? Yes, from now on I’ll start using purely the new branded term Adobe Analytics and R.I.P. SiteCatalyst. Ok, I can still use SiteCatalyst on the tags so my blog posts gets found easier from Google etc.

Back to the buzz. I have been two times on the Adobe Summit and I can see that people mostly love Adobe’s products like Adobe Analytics and are positively buzzing around it. But where does this buzzing go between the Summits? Yes, thanks to Adobe (special mentions: @benjamingaines, @analyticshero, @jexnerADBE & @adamgreco) things have been surely developed to positive direction with the helpful blog posts, help forums and social media is always a good add-on to get the PR shouted widely. Anyway, after the spring 2014 update to Adobe Analytics there has been lots of buzz and discussions among the normal users too. Love it, hate it, just feel something…finally some great discussions around Adobe Analytics.

Here are some highlights of the release:

There is so much information available about the big update so would be stupid to write again all the same content. Here are all the links you need to investigate more. First some official ones from Adobe:

Jerome Richard (Digital Balance) has a nice overview of the update with some nice tips:
http://www.digitalbalance.com.au/our-blog/the-new-adobe-analytics-spring-release/

Erin McElvee (Fuel Interactive) has also done a nice drill down of the new features
http://www.fuelinteractive.com/blog/adobe-analytics-spring-2014-release-feature-drill-down

The release is so fresh that even I haven’t had enough time to test and investigate all the new updates and features. But I’m sure that even without proper testing I’m surely going to love the new segmentation manager and it’s new features. Why is that? Well, I’m an Web Analyst and I’ll do lots of segmentation, I mean lots of!

About the new navigation

One change has been very controversial. Yes, I mean the updated navigation menu. Some called it “sliding menu”, but I named it to “click navigation”. Like many others, I hated it too when I first tried it. It is very frustrating to look specific variable or report if you can’t move quickly within the navigation. Now you have to click every time you want to move forward or backward in the menu and it doesn’t show the menu structure automatically with mouse (hover effect).

Luckily, Adobe updated the search and now it’s much more easier to find your variables and reports. At first, I didn’t like the idea to search every time, but a tried it once and now I’m addicted to use it. That’s why the new navigation system doesn’t really bother me anymore. Adobe also said that this only one update to the navigation and in the future we should all be happy about the outcome how we can use the navigation easier etc. I completely understand why some of us aren’t happy about the update, because if for some reason you have no idea what is the name of the variable to look for then it’s frustrating to click thousand times to go through the whole navigation structure and hard to get the big picture of the navigation content.

I’m starting to like the new nav system also because of the following situation: 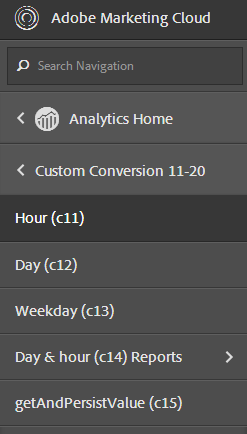 When you are on the right spot and want to look report for “Hour (c11)” and after that you could want to look the report for another variable that is in the “same group”, for example the “day (c12)” report. With the updated navigation system you just have to move your mouse to “day (c12)” and click it. This is much faster than before when you had to navigate with your mouse to the right section of the nav system and this could take some time. So I’ll start to find new tricks why this new navigation is much better. Please comment if you have find other good tricks and tips or continue the official discussion about the new navigation in Adobe’s help forum:
http://help-forums.adobe.com/content/adobeforums/en/analytics-forum/adobe-analytics.topic.html/forum__klfe-the_new_slidingmenu.html

And some final words. GREAT JOB ADOBE FOR MAKING COOL UPDATES TO THE BEST ANALYTICS TOOL (THAT I HAVE EVER USED)!

Ps. Off-topic: This a matter of opinion, but if I could make the change then I would suggest to make the links in the navigation system much tighter and compact. For my eyes (only?) there is too much empty space between the links. I understand that now it’s surely is very clear and simple, but still…